Aaj Tak Ran A National Debate On A Parody Tweet About Priya Varrier, Gets Trolled

Spoof or Parody is intended to poke fun. However, the close nature of reality gets misunderstood and it turns into real life comedy. News channel Aaj Tak had a taste of the ruthless side of parody when they fell for it.

Just In : After the viral video of Priya Prakash Varrier, Whenever we or our fellow Muslim Brothers closed our eyes to offer Namaz, instead of Allah, her face would appear, which is hurting our sentiments, hence we issued a fatwa against her.”

Priya Varrier became extremely viral these past few days and was on every timeline. She featured in a song from Malayalam film  ‘Oru Adaar Love’ that went on to create countless memes.

Aaj Tak thought the tweet to be from one of their competitors and actually covered it as real news. The news anchor Anjana Om Kashyap went into an impassionate monologue about the fatwa. 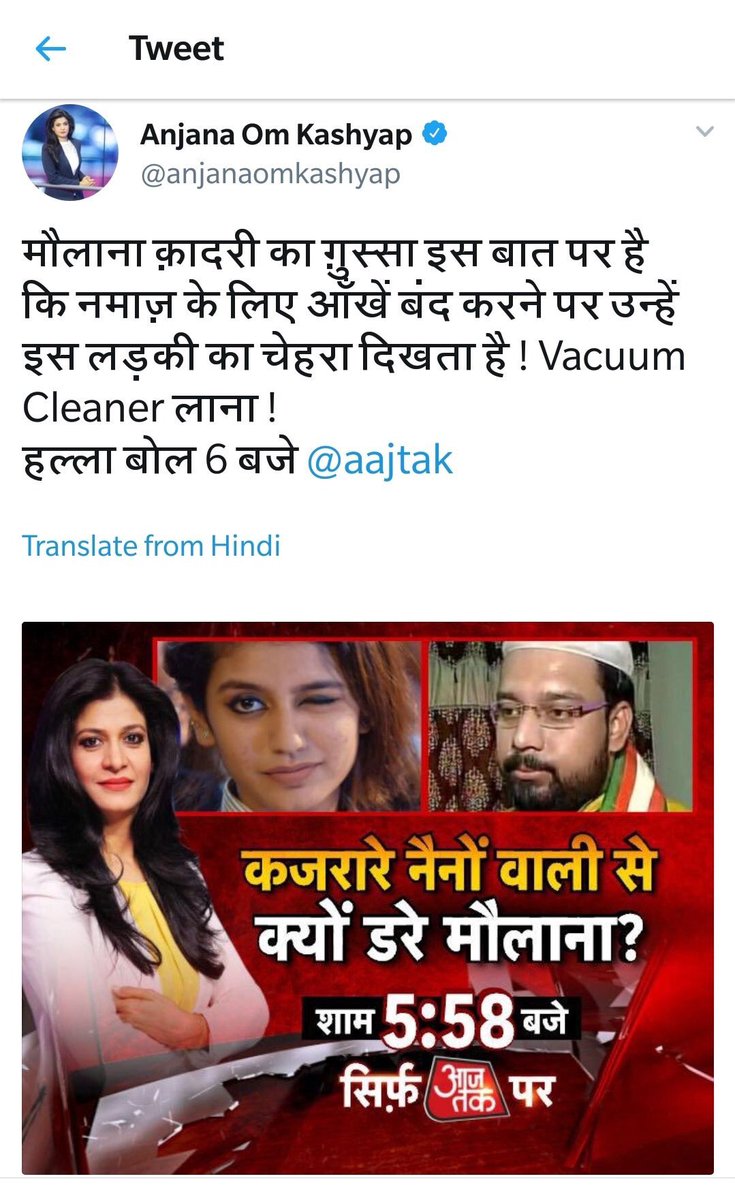 While for the unaware, it is understandable to be misled by such accounts. However, aren’t news channels expected to dig a little deeper about their sources?

Honestly, this entire situation is a comedy gold.

This is how the twitterati reacted:

And Now @anjanaomkashyap will have a debate on @aajtak #HallaBol based on Fake Quote by a Parody Account.
Well Done Indian Media! pic.twitter.com/eZ8lm3gibk

Can You Guys believe It? @anjanaomkashyap is currently have a PRIME TIME debate on @aajtak based on this Fake Tweet by a Parody Account. #GodiMedia pic.twitter.com/gssaGv5KfL

Have to say that goddamn @TiimesHow tweet was genius. Thousands got taken in & I was no exception when these two tweets appeared on my feed courtesy @vasudha_ET & @GargiRawat. Perhaps because more than the handle and the DP likeness, the content was totally believable. Mea culpa! pic.twitter.com/LbIGbHmUUA

Gold Standard of credible journalism? AajTak falls for such an obvious parody not only exposing a complete lack of fact checking but its own bias for such sensational news. https://t.co/WWDqxvafLH

So @aajtak famed anchor @anjanaomkashyap falls for parody account of Maulana to vilify maulanas. This happens when you want to propogate this kind of ‘news’ to vilify Muslims. This is now a clear pattern with @IndiaToday
Group. Going the way of @TimesNow https://t.co/lXnLLaYz1D

Liked what you saw on DailySocial?

Headlines We Expect To See Now That Bhai Has Been Arrested